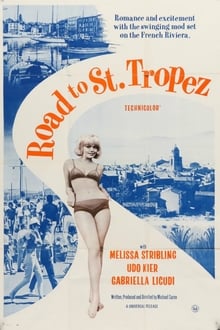 The debut film from pop singer turned film director Mike Sarne (Joanna; Myra Breckinridge) is an ‘anti-travelogue’ starring Udo Kier, Melissa Stribling, and Gabriella Lucidi. The stylishly shot film tells of a woman who has a brief amorous liaison while on a trip along the South of France to Saint Tropez, but returns disillusioned.