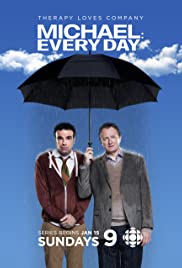 Michael: Tuesdays and Thursdays is a Canadian television sitcom that debuted on CBC Television in 2011.

Described by the National Post as a cross between What About Bob? and Frasier, the show stars Matt Watts as Michael, a neurotic young man who sees his therapist twice a week, and Bob Martin as David, his therapist who views Michael as an ideal guinea pig for the experimental psychiatric techniques he hopes will turn him into a bestselling pop psychology writer. Filmed in Ottawa, the show’s cast also includes Jennifer Irwin, Pablo Silveira, Martha Burns and Tommie-Amber Pirie.