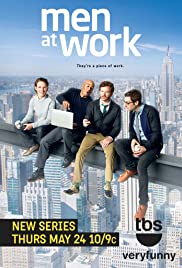 Men at Work is an American comedy series that airs on TBS. The series was created by Breckin Meyer and stars Danny Masterson, Michael Cassidy, Adam Busch, James Lesure and Meredith Hagner. The series premiered on May 24, 2012 at 10 pm. TBS second season premiered on April 4, 2013 with another 10 episode season.