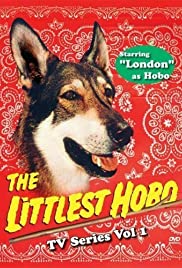 The Littlest Hobo is a Canadian television series based upon a 1958 American film of the same name directed by Charles R. Rondeau. The series first aired from 1963 to 1965 in syndication, spanning six seasons and was revived for a popular second run on CTV from October 11, 1979 to March 7, 1985. It starred an ownerless dog.

All three productions revolved around a stray German Shepherd, the titular Hobo, who wanders from town to town, helping people in need. Although the concept was perhaps similar to that of Lassie, the Littlest Hobo’s destiny was to befriend those who apparently needed help. Despite the attempts of the many people whom he helped to adopt him, he appeared to prefer to be on his own, and would head off by himself at the end of each episode.

Never actually named on-screen, the dog is often referred to by the name Hobo or by the names given by temporary human companions. Hobo’s background is also unexplained on-screen. His origins, motivation and ultimate destination are also never explained.

Although some characters appeared in more than one episode, the only constant was the Littlest Hobo himself.