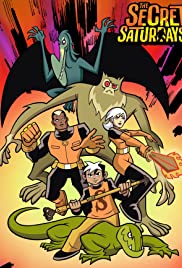 The Secret Saturdays is an American animated television series created by Canadian cartoonist Jay Stephens for Cartoon Network. It debuted on October 3, 2008, in the United States. The series follows the adventures of the Saturdays, a family of cryptozoologists that work to keep the truth about cryptids from getting out, in order to protect both the human race and the creatures themselves. The Saturdays travel the world searching for cryptids to study and battling twisted villains like the megalomaniac V.V. Argost. The series is influenced by the style of ’60s-era Hanna-Barbera action series, and is combined with Jay Stephens’ own personal interest in cryptozoology. The show finished its run on January 30, 2010 and is currently in reruns airing on Boomerang as of December 5, 2011. The Saturdays are also set to appear in Ben 10: Omniverse.