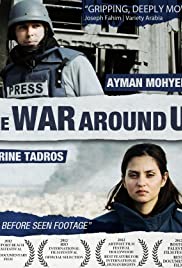 The War Around Us

The War Around Us

In 2008 two best friends found themselves trapped in one of the most dangerous places on earth – the only western journalists in the Gaza Strip on what was supposed to be a 24-hour assignment. The War Around Us captures the collision of veteran war correspondent and one of TIME’s most 100 influential people, Ayman Mohyeldin, with rookie reporter Sherine Tadros. As missiles shower the city and unspeakable atrocities emerge, the pair is torn by fierce professional rivalry, private terror and grim humor – with no way out and the whole world watching.